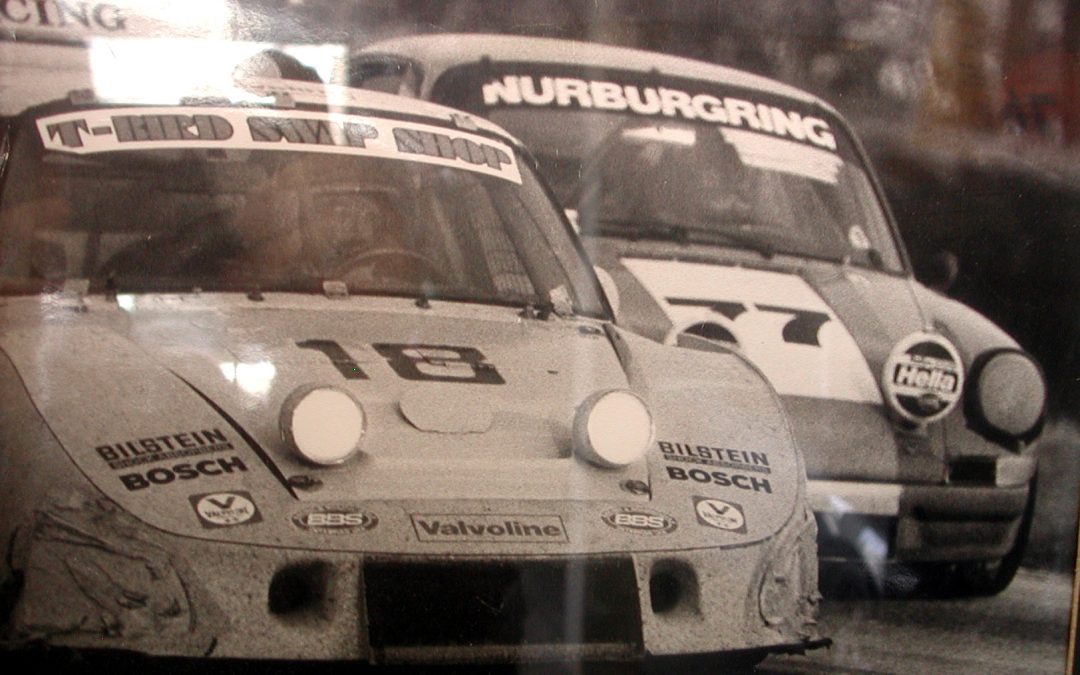 Follow up post to Nord Stern History Post 40 – Charlie Lloyd. As mentioned in the earlier post, in 1982 a group of Nord Sterners took on pro sportscar racing at arguably its highest level, entering the 12 Hours of Sebring. The driver line up of our intrepid Nord Sterner’s was made up of Dudley Davis, car owner, Hank Godfredson, and Charlie Lloyd. Rick Moe had built the car in his local shop, Nurburgring, right here in the Twin Cities. No factory support for these guys.

At that time IMSA had three classes. GTP for the highly modified cars like the 935 as well as the new prototype cars like the Lola T600 and March 82G. Then the production based cars were split into two groups; GTO for those over 2.5 liters which was heavily populated with American iron, and GTU for cars under 2.5 liters like the Porsche 911s and the Mazda rotary engined RX-7. One can only imagine the speed differential on Sebring’s long back straight. Also the GTP cars were beginning to generate significant downforce where our heroes had none.

80 cars were entered and 67 took the green. Sebring is famous for how tough it is on cars and 1982 was a particularly tough year with only 28 finishing. The grid was a who’s-who of drivers and cars at that time. Entry list here. The old 5.2 mile circuit was even rougher than it is today as it featured much more of the original WWII airfield concrete.

Paddock set up was a bit more rustic than we see today.

Our guys preserved for a 5th in class finish and a remarkable 21st overall. Check out the results here. They finished ahead of some incredible cars and drivers. Note the 6th overall finish of the 1st place GTU RX-7. With the rotary engine IMSA really didn’t know how to class them and with factory support they were dominate at that time in GTU. Also easily the noisiest race cars ever run. I’ll reach out to Rick Moe on the engine details but I’m assuming they were running a 2.5 liter “short stroke” which was a pretty sweet motor at the time. Early case with 90 mm cylinders and a 67 mm crank. Loved to rev and reliable. Likely then to make a little over 200 hp. Maybe. So even with the boost turned down, the 935s had 3x the power.

The header photo above was featured on the front page of Sunday morning’s edition of The Sebring News.The winning car of John Paul Jr & Sr, and our guys!

Thanks to Hank Godfredson for the photos.

Its always fun when I get feedback on a post with additional information. In this case Ben Robertaccio emailed me with an update on the current status of the car. He related “

Long story short, my dad bought the car as a project sometime in the early-nineties with every intention to restore it to it’s prior glory.  Life and other projects got in the way and we never got it put together. I sure wish we did because it would be a fun vintage racer today. We sold it in the mid-2000s to a Bay Area dentist who had the car restored. Since then I know he’s run it a few times at the Monterey Historics and other events out that way.