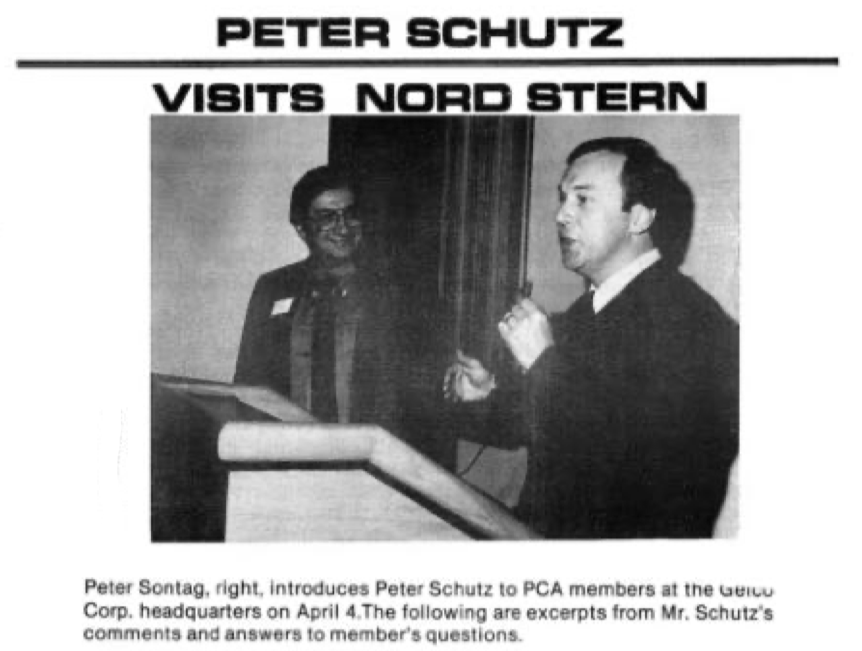 Peter Schutz was CEO of Porsche between 1981 and 1987. His predecessor was Ferry Porsche himself. Very much a sales guy, he is credited with saving the discontinued 911. His logic was simply that if people wanted to buy it, we should keep making it.  He also addressed the considerable quality issues Porsche had been experiencing. Coming from Caterpillar, Cummins, and Deutz, he put Porsche on a path to the levels of quality we enjoy today. Under his direction Porsche developed the 3.2 Carrera. Sales increased from 28,000 in 1981 to 53,000 in 1986.

Peter Sontag was a Nord Stern member who was in the travel business. A native of Austria, he had a relationship with Porsche factory through his Treffen to Stuttgart product where he hosted amazing trips to the Porsche factory, Weissach, and other great sites. I went twice. The level of Peter’s access to Porsche was considerable, probably best measured by the fact that Ferry Porsche and some of his executive staff joined us for dinner one night. It is not surprising Peter Sontag developed a relationship with Peter Schutz almost immediately.

Sontag organized a meeting with Schutz for Nord Stern on Saturday, April 4th, 1981. It was covered in the June 1981 Nord Stern which you can review here. Schutz was traveling the US to learn about the US Porsche markets. The 26 page transcript is interesting reading and is available here. An economic down turn in 1987 and subsequent unfavorable USD to DM exchange rates caused sales to plumet and Schutz was replaced by Heinz Branitzki in December 1987.

Peter Schutz passed away in October 2017. His daughter Lori is a very active PCA member.

Thanks to Corey Johnson for the transcript and the Nord Stern as well as his reflections on the visit.