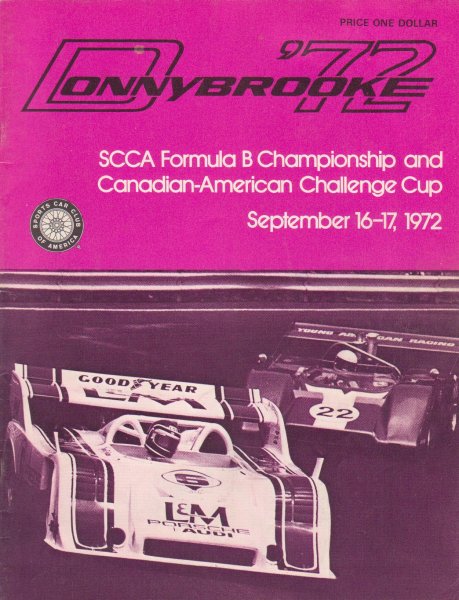 Shown here on the grid ready to follow the 911 targa pace car supplied by Metropolitan Imports.

These photos got me doing a little research on the 1972 Can-Am at Donnybrooke. The Team Penske 917-10s were on the pole. Donohue and Penske teamate George Follmer swapped the lead back and forth. Donohue in his book “The Unfair Advantage” wrote that he was running T1 flat and Follmer lifting slightly. Unfortunately Donohue blew a rear tire in T1 at 190 mph flying off the track but fortunately not hitting anything.  Follmer lead the rest of the race until the last lap when he ran out of fuel and finished 4th. Francois Cevert won in a McLaren M8F, Milt Minter is Vasek Polak’s 917-10 2nd, and Jackie Oliver in a Shadow MkIII 3rd. Donohue’s pole winning lap was a 1:25.2 (127 mph average).

Details on the race can be found here:  https://www.racingsportscars.com/results/Brainerd-1972-09-17.html

I love this photo that Larry Skoglund took of Mark Donohue that weekend. Brainerd was his first race back after his huge accident on July 3rd testing at Road Atlanta. Donohue had seriously injured his knee and no doubt would have still been in some pain.